Jan. 24th we will welcome Rev. Erin Swenson to UPC to lead the adult Sunday School class: “So you think you know what gender is? A brief tour of modern gender diversity. Scripture will be from Matthew 19:12” and to preach.: Life Beyond the Comma: Confessions of a Transgender Troublemaker

The Reverend Erin K. Swenson, Th.M., Ph.D., was ordained as Eric Karl Swenson in 1973 by the Presbytery of Atlanta, which was then a part of the southern Presbyterian Church in the U.S. Twenty-three years later, after completing a gender transition from male to female, that ordination was sustained by the Presbytery of Greater Atlanta, PCUSA, making Erin the first known mainstream minister to transition from male to female while remaining in ordained office.

Erin continues to practice active ministry as a psychotherapist/marriage and family therapist at her office at StudioPlex in Atlanta’s Old Fourth Ward, working primarily with gender identity issues.

In 1999 Erin founded, along with Mr. Raja Qasim, the Southern Association for Gender Education, Inc., a non-profit organization devoted to educating institutions of higher learning, medical associations and practices, and faith groups of the diversity of gender expression and the place of gender in modern life. She travels nationally and in the UK presenting to conferences, churches, organizations, seminaries, and universities. Her Wednesday evening gender support group has been serving the community for over fifteen years.

She continues to maintain warm and supportive relationships with her ex-spouse and their two grown daughters, as well the rest of her family, in the wake of her 1995/96 gender transition. Erin enjoys music, reading, and triathlons. 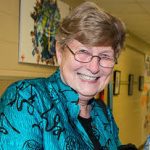