Called OUT: God, the Bible, and the LGBT Community 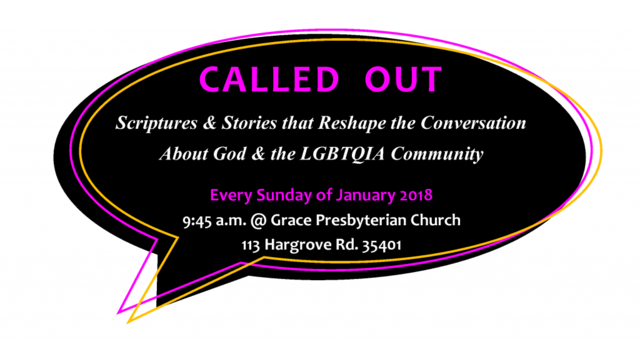 Grace Presbyterian Church Holds Special Study, Called OUT: Scripture and Stories that Reshape the Conversation about God and the LGBTQIA Community

January 7, Called OUT:  From a Parent’s Heart

Sharing his exegetical work, Scott will explore some of the core scriptures employed to condemn the LGBTQIA community

January 21, Called OUT: Raising Awareness of the Transgender Community

We will also hear stories from the local/Grace community.

January 28, Called Out: Making Room for All

As we conclude the series, participants will have an opportunity to share questions, and explore together how we can better live out being an open & affirming  congregation.

Scott McQueen, a former Southern Baptist pastor, currently serves as a chaplain with Hospice of West Alabama. In addition, Scott is also an accomplished folk artist, participating in art shows across the Southeast. Scott is a graduate of Samford University (B.A), New Orleans Baptist Theological Seminary (M.Div) and Luther Rice Seminary (D.Min). Scott is married to Jackie, his wife of 34 years. Together, they have three grown children.