If we back up just a little, before the encounter with Nathanael, here is what is happening: Andrew and another guy, who have been hanging out with John the Baptizer, are encouraged by John’s words to start following Jesus.  They tag along behind him, and get up the courage to ask Jesus where he is staying. “Come and see,” Jesus says. And they do.

And whatever happened in that brief span of time that they were together, convinced them that John was right when he called Jesus “the lamb of God.” So the very next day, Andrew finds his own brother, Simon, and says to him, “We have found the Messiah.”

Introductions are made. Jesus looks at Simon and says, “I’ll call you the Rock. Follow me.”  The next day Jesus finds Philip, and though he doesn’t give him a nickname, he also says to him, “Follow me.” Philip then goes out and finds his best bud Nathanael, and tells him, “We have found the one Moses wrote about. He’s from Nazareth!”  It feels like a combination of two children’s games: “Tag” and “Telephone.” Except that Nathanael apparently doesn’t feel like playing.

“Can anything from Nazareth be good?”

Which could be a joke…and we get it. If you live in T’town, you are expected to say the same thing about Auburn. It could be a bit of friendly banter between friends.

Or it could be a joke with a little bit of despair behind it. After all, Nathanael is also from Galilee. He just happens to be from Cana rather than Nazareth. Perhaps he, like many others, has grown tired of waiting for a Messiah, and doesn’t want his hopes crushed. (And really, who ever heard of a carpenter being the father of a messiah!)

Or it could be a joke with a little fear behind it. If the one Moses wrote about really has appeared, then things are going to change. Change, even if it is for the good, does not come easily, or without pain or sorrow. So, Nathanael, uses humor to mask the fear that he is feeling.

Or, worst of all, it could just be a mean, prejudiced thing to say. And something probably every one of us in this room has thought about some subset of people at some time in our lives. So we are all guilty of this one. We might not have said something horribly demeaning about Haiti or El Salvador, or the whole continent of Africa, but the sad truth is we all have biases. Some of which we are aware, and others that we may never recognize. Let your disgust over the President’s alleged comments, inspire you to deeper self-reflection, confession, and awareness. Let this “event” intensify our commitment to unity; and strengthen our reverence for people throughout the earth.

Here’s what I don’t want:  I really don’t want Jesus to call someone who is mean-spirited or prejudiced. But guess what? I don’t get to tell Jesus who to call. I found a fabulous notecard last summer. It says, “Heaven will not be filled with people who never made mistakes.” Even while we proclaim, “love is love is love is love” in a celebration of diversity, we must also acknowledge that “sin is sin is sin is sin.” Anything that separates us from the welcoming, freeing love of God is sin.

So Nathanael was flawed. That’s really good news. Because Jesus invited him anyway. And Jesus invites each of us. As we are. Calls us by name, in fact.

So, yes, Nathanael, something amazingly good can come from Nazareth. Despite your fear, or distrust or protective sarcasm, something good will come from that lowly place. That’s how God works. God chooses unknown women and simple carpenters to parent God’s son. God chooses a dumpy place like Nazareth to be her son’s home. And that son will invite a random group of nobodies to be a part of a world changing story. That’s the mysteriously deconstructive way that God works.

Philip must know his friend well. He doesn’t try to defend his invitation. He doesn’t over explain. He doesn’t say anything except, “come and see for yourself.” We’ve moved on from “tag,” and “telephone,” to “truth or dare.” You don’t think your tongue will freeze to the pole? Well, try it and see. You don’t think this guy from Nazareth is anybody? That’s fine. Just come and see…who could resist? You would have to be incredibly stubborn to stay away. Too stubborn for your own good, as they say.

Here’s where it gets fun. As Nathanael and Jesus are approaching each other, Nathanael thinks he is “it” in this game of tag. It’s his turn to run up and “tag” Jesus, right? Now, unless you are super speedy or playing with a group of kids who are a lot younger than you are, no one really enjoys being “it.” What does Jesus do? He takes Nate’s turn to be “it.” Jesus “tags” Nate with this line: “There is a real Israelite! Not a false bone in his body!” (John 1:47, The Message) Jesus meets us where we are. Jesus “gets” us. Jesus “gets” Nate’s personality. The linguistic maneuvering behind this phrase is a bit of a rabbit hole, but suffice it to say Jesus is making a joke.  The word for “deceit” comes from the word for “Jacob,” which is synonymous with “Israelite.” Jesus is saying that there is none of “Jacob” in Nathanael. Remember Jacob? He’s the one who stole his brother’s inheritance. He went to his dying father’s bedside, wearing animal fur to make his arms hairy, and pretended to be the older twin so that he could get the bigger share. Jesus is paying Nate a compliment with this remark. Jesus sees Nathanael for who he truly is.

Jesus also mentions Nathanael’s location, which seems like an odd and random fact. “I saw you under the fig tree!” Jesus says. According to some scholars, this isn’t so random after all. Sitting under the fig tree is a reference to being in a prayerful place or studying the Torah. It would appear that Nate isn’t just some sarcastic guy. He is multi-dimensional, like each of us. He isn’t easily defined. The remarkable characteristic which Jesus notes is that Nate is not deceitful. He isn’t tricky or crafty or devious. Which would lead us to believe that he is candid, truthful, sincere. Not perfect. But sincere. Sounds like a pretty good quality for a disciple.

It’s not our job to cram the gospel down someone’s throat. When you threaten someone with good news, it isn’t really good news, is it? We never see Jesus doing that. He challenges. He speaks truth to power. He witnesses through his words and deeds to the possibility of God’s restorative love. But he doesn’t force himself on anyone. Just “come and see.”

Our job is to follow and to invite. Whether it’s true or not what some scholars say about the significance of the fig tree, let’s hold on to that symbol. If it’s true, then Nate’s practice of prayer and study is what made him open to the possibility of encountering Jesus. We see the same thing in Samuel’s story, which we heard read this morning. The child Samuel lived in the Temple. His parents placed him there, dedicating him to God. He was in a place where he could hear God’s voice calling to him. In our following, do we set aside time to be with God, to be open to God? If you can’t see the leader, if you can’t hear his footsteps, if you can’t recognize the sound of his voice, it’s pretty much impossible to follow…

We are going to pause here to do something a bit…well, different…as we began worship today, your heard a list of names being read. First names. Names of imperfect saints who have gone before us or who are present in our midst. Each the name of someone whom God called. But we each need to be reminded that God calls us, each of us. So let’s call out our names! Shout out your name! That is a beautiful sound…Sisters and brothers, in your following, never grow tired of giving thanks to the God who sought you and found you, and called you by name. Amen. 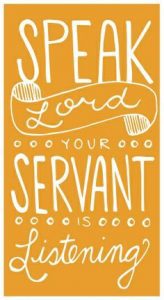